On September 13, 1993, Israeli Prime Minister Yitzhak Rabin and Palestine Liberation Organization (PLO) Negotiator Mahmoud Abbas signed a Declaration of Principles on Interim Self-Government Arrangements, commonly referred to as the “Oslo Accord,” at the White House. Israel accepted the PLO as the representative of the Palestinians, and the PLO renounced terrorism and recognized Israel’s right to exist in peace. Both sides agreed that a Palestinian Authority (PA) would be established and assume governing responsibilities in the West Bank and Gaza Strip over a five-year period. Then, permanent status talks on the issues of borders, refugees, and Jerusalem would be held. While President Bill Clinton’s administration played a limited role in bringing the Oslo Accord into being, it would invest vast amounts of time and resources in order to help Israel and the Palestinians implement the agreement. By the time Clinton left office, however, the peace process had run aground, and a new round of Israeli-Palestinian violence had begun. 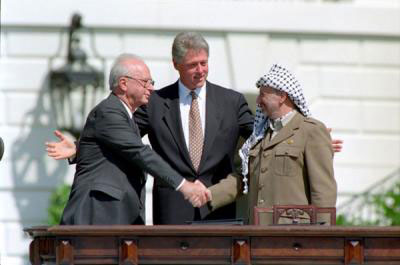 The Clinton Administration and the Arab-Israeli Peace Process, 1993–1996

The Clinton administration did not initially make Israeli-Palestinian peace a priority. Clinton and his advisors believed that a diplomatic breakthrough on the Israeli-Syrian track would be more likely, and that Israel’s leaders would find it politically easier to pull back from the Golan Heights than to withdraw from the West Bank. An Israeli-Syrian agreement, they reasoned, would also lead to an Israeli-Lebanese agreement, and help isolate Iraq and Iran, the principal regional opponents of the peace process. U.S. officials were briefed on secret negotiations that the Israelis and Palestinians had begun in Oslo in December 1992, but made little effort to get involved in them.

The United States did not play a major role in the negotiations that led to the Israeli-Jordanian peace treaty of October 1994, though Clinton lent his support by hosting King Hussein and Rabin in Washington and urging Congress to forgive Jordan’s debts. Nor did the United States play a critical part in the negotiations leading up to the May 1994 Cairo Agreement, which finalized Israel’s withdrawal from most of Gaza and Jericho, or the Taba (or Oslo II) Agreement of September 1995. The latter agreement divided the West Bank into separate areas under Israeli control, Palestinian control, and Israeli military responsibility with Palestinian civil administration, respectively. Oslo II aslo spelled out provisions for elections, civil/legal affairs, and other bilateral Israeli-Palestinian cooperation on various issues. Since the Oslo Accord did not give the United States monitoring responsibilities, the Clinton administration found itself largely confined to defusing crises and building up the Palestinian Authority with economic aid and security assistance.

On the Israeli-Syrian track, the administration exerted itself more forcefully, but with few results. Clinton, Secretary of State Warren Christopher, and Special Middle East Coordinator Dennis Ross tried to build on Rabin’s August 1993 promise to withdraw fully from the Golan if Syria agreed to full peace and necessary security arrangements. By 1994, these talks stalled over Israel and Syria’s different definitions of “full withdrawal.” The Syrians insisted that the Israelis should withdraw to the line of “June 4, 1967,” when they had controlled a pocket of land on the northeastern shore of the Sea of Galilee, Israel’s principal source of water. The Israelis wanted to pull back to the 1923 international border, which would have left the Sea of Galilee under their sovereignty. That July, Rabin indicated to Christopher that Israel would withdraw to the June 4 line if Syria met its other needs, paving the way for talks between Israeli and Syrian military officers. However, these negotiations eventually bogged down over whether Israel could retain early warning stations on the Golan, and also became politically controversial in Israel. Rabin thus chose to suspend them until after Israel’s elections in 1996.

In November 1995, Rabin was assassinated by Yigal Amir, an Israeli who opposed the Oslo Accords on religious grounds. Rabin’s murder was followed by a string of terrorist attacks by Hamas, which undermined support for the Labor Party in Israel’s May 1996 elections. New Prime Minister Binyamin Netanyahu hailed from the Likud Party, which had historically opposed Palestinian statehood and withdrawal from the occupied territories.

Worried that the peace process might collapse, the Clinton administration involved itself more actively in Israeli-Palestinian negotiations. In January 1997, following intensive U.S. mediation, Israel and the PA signed the Hebron Protocol, which provided for the transfer of most of Hebron to Palestinian control. In October 1998, Clinton hosted Netanyahu and Arafat at the Wye River Plantation, where they negotiated an agreement calling for further Israeli withdrawals from the West Bank. Infighting over the implementation of the Wye Memorandum, however, brought down Netanyahu’s government in January 1999.

In Israel’s May 1999 elections, the Labor Party’s Ehud Barak decisively defeated Netanyahu. Barak predicted that he could reach agreements with both Syria and the Palestinians in 12 to 15 months, and pledged to withdraw Israeli troops from southern Lebanon. In September, Barak signed the Sharm al-Shaykh Memorandum with Arafat, which committed both sides to begin permanent status negotiations. An initial round of meetings, however, achieved nothing, and by December the Palestinians suspended talks over settlement-building in the occupied territories.

Barak then focused on Syria. In January 2000, Israeli, Syrian, and U.S. delegations convened in West Virginia for peace talks. These negotiations foundered when Barak refused to reaffirm Rabin’s pledge to withdraw to the June 4, 1967 line, arguing that none of the concessions offered by the Syrian delegation in return could be considered final, since Syrian President Hafiz al-Asad was not present. A subsequent meeting between Clinton and Asad in Geneva failed to produce an Israeli-Syrian accord.

Barak then withdrew Israeli forces unilaterally from Lebanon and returned to the Palestinian track. At the prime minister’s insistence, Clinton convened a summit at Camp David in July 2000, where he, Barak, and Arafat attempted to reach a final agreement on the West Bank and the Gaza Strip. Accounts differ as to why Camp David failed, but it is clear that despite additional concessions by Barak, the Israelis and Palestinians remained strongly at odds over borders, Jerusalem, and whether Israel would recognize Palestinian refugees’ “right of return.” The summit ended without a settlement; Clinton would blame Arafat for its failure.

Thus, by the end of 2000, the prospect of ending the Arab-Israeli conflict looked more distant than it had eight years earlier. The Clinton administration had helped facilitate Israeli-Jordanian peace and lay the foundations for Palestinian self-rule. More broadly, the negotiations of the 1990s helped Israel, the Palestinians, and Syria break with numerous diplomatic taboos and establish a basis for what a comprehensive Arab-Israeli peace might look like. But a settlement of the Arab-Israeli conflict remained elusive.